I remember looking at cookbooks before this one--a 70's Betty Crocker, several for children, maybe Julia Child & Company. And I had used cookbooks and recipes, but this was perhaps the first cookbook I really read.

Everyday Cooking comes in under 200 pages, but it is packed with information. It was also, for me, a glimpse into another world--one of sophisticated pâtés and soufflés but also of French farmhouses and comforting stews. An attainable world to anyone who could follow a recipe.

That is one of the great things about cookbooks--they can take you places. While France is not exactly an exotic destination, to the teenaged me it seemed far away. Pépin's care with food was (is?) in direct contrast to the speed and convenience mentality of this country.

Much of the book focuses on thrift and practicalities. Sprinkled throughout are injunctions to save meat and veg trimmings for other dishes. And this book may be the source of my love of using leftovers. Several times he shows a dish and then reincarnates the leftovers in a new way. I've always taken great satisfaction in doing the same thing.

None of the ingredients are particularly hard to obtain, and the flavor profile is simple French--lots of herbs, wine, garlic. But the techniques are surprisingly demanding when compared to the short-cut cooking of today. He has no problem suggesting you bone out a whole chicken, create aspic, or stuff a lamb breast. But his very matter-of-factness is what makes it all seem completely do-able. There is no hand-wringing or apologizing for the work--just clear instruction and the assumption that these things are worth doing.

I've made many things from this book over the years and perusing it for this post made me note a few more things to try. May I suggest the following:

Vegetable Soup with Corn Dumplings
I don't think I've ever actually made this soup, but from it I got the idea to stir in some pesto or pistou into vegetable soups. This is a good trick if your soup is flat and needs a little something.

Eggs Jeanette
A hot dish made of deviled eggs. Sounds weird and rich right? It is, but also kind of wonderful as evidenced by Lynne Rossetto Kasper's Pan-Crisped Deviled Eggs on French Lettuces. Kasper's recipe, a glass of white wine, and screened-in porch are a fine way to mark a summer evening.

Chicken Liver Pâté
My mother and I have made this for years. It is completely reliable, easy and delicious. And it freezes! We never bother with the aspic.

Chicken in Mustard Sauce
I can't count how many times I made this in college. It's ugly but good, and it has basically three ingredients: chicken, mustard and onions.

My grandmother loved Jacques Pépin and bought me copies of nearly all of his books as they came out, so expect to see him again on these pages. She was not alone in her admiration. Shanna Compton has a great poem "To Jaques Pépin." I saw it in Gastronomica, but it is also anthologized in Best American Poetry 2005.

It doesn’t seem right to duplicate it here without permission, but the theKitchn posted it for poetry month one April. It doesn't duplicate the line breaks, however, so I urge you to seek out the original.
Posted by Devon at 7:48 AM 1 comment:

A twofer! Whole foods and Scandinavian cuisine in the same volume. While I have several natural foods cookbooks, I have only a handful of cookbooks from Northern Europe, so this is a special Venn diagram treat.

Written by a Finn, but for a U.S. audience, the recipes seem authentic but with suggestions for hard-to-get ingredients and explanations of techniques and recipes that are probably common knowledge for Finnish cooks.

I harbor a fondness for whole/natural foods--a holdover from my childhood with a mother who didn't buy anything with artificial ingredients or colors, made her own bread, jam, and yogurt, and raised chickens and rabbits for slaughter. We had TWO full size chest freezers for our family of four. How else are you going to store 50 chickens, half a cow AND the garden produce?

This makes it sound like I was raised by hippies, but I must interject my mother's correction that she predates the hippies. She was a Bohemian, thank you very much. 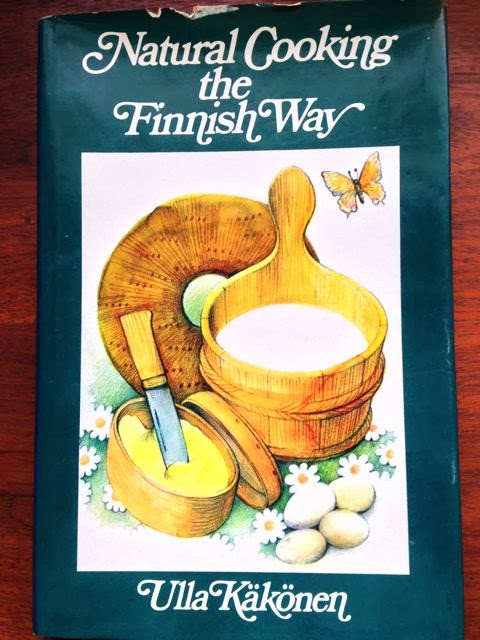 As you can see, Natural Cooking the Finnish Way radiates good health, with its wholesome cover illustration of dairy, eggs, butterflies and flowers. I think that wheel in the background is a bread--but maybe it's a cheese?

The recipes are heavy on fish, potatoes, cabbage and other ingredients I associate with Northern cuisine. What is surprising is the number of grain porridges, cereal soups, and the use of organ meats. This ain't Aquavit's elegant take on Scandinavia. This is food meant to sustain people through a long winter and a short growing season--even shorter than Michigan's.
I pulled this out after finding myself with a huge bunch of dill leftover from making gravlax.  I wanted to use some up in a soup and didn't have a whole lot in the house, but I did have what it takes to make Dill Soup (Tillikeitto): potatoes, carrots, dill, pepper and cream. Easy-peasy and it gets point for being made with water instead of stock. I did add more salt than she called for--I find that to be a typical failing in the natural cookbooks--and a touch more cream, and a splash of Tabasco and lemon juice to spark it up. It was comforting and dilly and better the next day, when the flavors ripened.
Dill Soup
Adapted from Ulla Käkönen

Bring salted water to boil. Add potatoes and carrots and simmer until soft, about 30 minutes. Blend with a stick or regular blender. Stir in dill, pepper, and cream. Adjust salt, add Tabasco and few drops of lemon juice if needed. If you add a lot of lemon juice it starts to taste like dill pickle soup--no bad thing either!

I have made some changes. 1) I prefer fresh or frozen blueberries than the dried. Their juiciness and tartness are more refreshing. 2) I usually use toasted slivered almonds rather than hazelnuts. I like hazelnuts, but it's hard to get ones that haven't started to turn rancid, sigh. 3) There's NO WAY that the porridge I had at Hell's Kitchen had only ¼ cup of cream--that baby was swimming in cream and it was glorious. But for an everyday breakfast, I stick to these proportions.

The night before (or if you like getting up early and not eating do this in the morning): cook the wild rice in boiling water, which takes between 30 and 45 minutes. The grains should be mostly open and starting to fluff. Salt it when it is done, or it will taste flat. Put in the fridge.

In the morning, toast 2 Tbs. slivered almonds in a dry skillet. Scoop some rice in a microwaveable bowl (about a cup, maybe less). Stir in the nuts, 2 Tbs. blueberries, 1 Tbs. dried cranberries, 1-2 tsp. of maple syrup, and 2 Tbs. heavy cream. Zap it for 30 seconds to a minute depending on your microwave. Eat up and then go chop wood or break a trail or something. Don’t get in the easy chair with a book and an afghan.

Note: Wild rice doesn’t get hard in the fridge like real rice, yay! But it doesn't last as long as real rice, boo! You want to use this up in 3-4 days, tops, otherwise it takes on a fermented flavor.