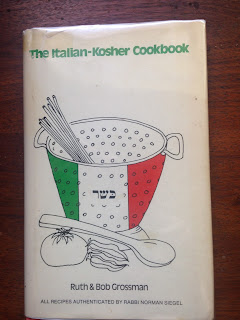 American Cooking: The Northwest
by Dale Brown and the Editors of Time-Life Books
1970

I recently visited Seattle for a conference, and while most of my food was decent but uninspired hotel cooking, I did have an amazing meal at Bar Sajor. Usually when I travel I manage to find a new cookbook to bring home, but this time I was so busy trying to cram in some sightseeing that I never got to a proper bookstore. I did see some cookbooks in a touristy shop or two, but nothing caught my eye; they were mostly "gifty" books.

On returning, I looked over my regional American shelves, but the pickings were slim. In fact only one book could be considered: American Cooking: The Northwest from the venerable Time-Life series Foods of the World.

For the uninitiated, FOW was series of 27 cookbooks that were published by Time-Life between 1968 and the late 70s. Each volume actually came in two parts: a hardback volume that described the topic cuisine (Classic French Cooking, Russian Cooking, etc.) and frequently also functioned as a travelogue, and a smaller, spiral-bound volume that contained just recipes. While the hardbacks included some recipes, the spiral volumes had all the recipes. Both can be found online for sale, though rarely together; the spirals are harder to find.

Library and estate sales are a good source for both kinds; I frequently see the international ones there. I got most of my international spirals in one full swoop at a library sale and have been filling in the bound volumes. Recently I snagged the American Cooking set, which is eight volumes alone! Unfortunately, I don’t have any of the spirals for the American set.

But they're still worthy reading, and The Northwest was enjoyable in its depiction of a large and diverse region. There was a focus on the historical Northwest, particularly the food ways of the pioneers, loggers, and traders of the frontier. Much of the text celebrates the natural bounty of the area with sections on hunting, fishing, and foraging.

While the initial intent of these books may have been educational, this volume, like many of the others, spends more time looking backwards than forwards. Even the interviews with contemporary cooks and food purveyors are pervaded with nostalgia for a disappearing way of life, one that seemed more immediate in the Northwest region.

Forty-five years after initial publication, those ways seem even farther away, and, of course, there is no indication of the massive changes in industry and population that would occur. Yet, there is still a sense of the forest when you visit the Northwest, even in the cities of Seattle and Portland. An acknowledgment perhaps, of the mountains that sandwich the area and its isolation from the east.

I tried the following recipe from the Alaska chapter. I like rhubarb and have ready access to it from my mother's garden. The rhubarb plants came with the farmhouse she bought 40 years ago--she occasionally divides or moves them, and they just keep coming back year after year. The one disadvantage of this old-fashioned rhubarb is that it is more green than pink. So, my ring lacked the rosy hue of the original. In fact, it was a distinctly unappetizing shade of what I will call "slug".

But as my stepfather said, "There's nothing wrong with the taste." And the taste is good--a clean sweet taste, refreshingly cold, and excellent with some whipped cream. I think if I made it again, however, I would scant the sugar by a couple of tablespoons to give it a more sour edge.

Combine the rhubarb, sugar and 1 cup of water in a non-reactive pot. Bring to a boil over high heat, stirring until sugar is dissolved. Simmer until rhubarb us tender but still intact. The original recipe suggests 10 minutes. I found it only took about 5 minutes, and my rhubarb was not very intact even then.

Meanwhile sprinkle the gelatin over the remaining ½ cup of water and let it soften, about 4 minutes. Off the heat, stir gelatin into rhubarb mixture and stir until it dissolves completely. Turn into an oil-coated ring mold. Cool to room temperature and then cover and chill at least 3 hours or until firm. Turn out to serve.

The book recommended serving this with strawberries and barely sweetened whipped cream. I think the cream is a good idea, but I'm not a fan of strawberry and rhubarb together. In the end, we just ate it with some Readi-Whip.

If you are brave, scroll down for a photo comparison.

I inherited several mid-century cookbooks on Chinese cuisine from my grandmother. I find them fascinating. Without fail, they all proclaim that they teach "real" Chinese cooking. Never mind that Chinese cuisine has serious regional differences--much can be said the same for any book on French, Italian or American cuisine. You gotta start somewhere, right?

I find Chinese books from this era to be endearing in their belief that acceptable result are possible in a Western kitchen with limited access to special ingredients, while also finding them to be unappealing in the liberal use of canned ingredients and MSG.

Hong, a restaurateur in NYC and Boston according the jacket, begins with a brief introduction, a list of purveyors of special ingredients, and a list of Recommended Chinese Restaurants.* He then jumps right into soups and shu mai and works his way through various ingredients, ending with tea and wine.

There isn't a lot of handholding here. Hong has no truck with explaining ingredients or techniques. You better already know how to stir-fry and what to stir-fry in. There are no pictures. This reads very much like the sort of recipe book a restaurant creates for its staff. Formula-based, the recipes give amounts and basic instructions, but the chef is expected to have enough experience to understand the preparation and serving of the dish.

To make matters worse, and this is what I love about this book, there is the actual syntax of the recipes. Hong loves to assign letters to his ingredients; I assume to make the actual writing of the recipes shorter and more efficient. He basically breaks all the rules of recipe writing. The result is something that will most likely make perfect sense to the engineers out there. The rest of us will have to muddle through what is distressingly like cooking instructions from IKEA.

This is also how he crams in 438 recipes in a 262 page book. He liberally uses cross-references like this:

272. Steamed Squab, West Lake Style (Si-Woo Bok Opp)
Use the same method and ingredients as in recipe No. 247, using 3 or more squabs instead of duck.

I will give this book credit for including the Chinese names of recipes in the text and index and for using mostly fresh foods and ingredients we don't see very often, including terrapin, eels, squid, and lotus root. Compare the complexity of the above recipe with a newspaper clipping I found in the book for a much more pedestrian and Westernized "Jade Empress Chicken."

Unfortunately nearly every recipe in The Chinese Cook Book calls for MSG--certainly every savory recipe calls for at least a teaspoon of "seasoning powder."  If this was standard operating procedure for Chinese restaurants in the day, no wonder everyone complained of headaches. I'm getting thirsty just thinking about it.

*including one in Detroit! New Life Chop Suey on Gratiot.
Posted by Devon at 2:14 PM No comments: