There's gold in them there hills!

I've never been lucky with mushroom hunting. Like all Michiganders I am familiar with morels and the lore around them. I keep a sharp eye out when walking in the spring and have gone out once or twice to find some but to no avail.

Always prized and usually elusive, morels are the stuff of legend--the serendipitous glade full of morels found while walking; the secret spots that produce year after year; injunctions about preferred habitats and neighbors: dead oaks, old apple orchards, burn patches. In fact there is no logic--just luck. In this way, morel stories remind of me of fish stories---"and it was THIS big."

But in recent years, my mother has found one or two each spring in her yard and this May we hit the mother lode! We were positively giddy as we picked them--carefully leaving a few to spore out and hopefully come back again next year.

But what to do with them? While always good simply sautéed in butter with salt and pepper, this seemed to call for a greater effort. But it's actually hard to find a good recipe that celebrates the morel without overwhelming them. In fact, it's hard to find recipes at all. Some of my upper Midwest books mentioned them, but most recipes used dried mushrooms. Others were less than forthcoming with details about cooking them. The consensus was simpler is better. In fact, the morel entry in the Woman's Day Encyclopedia of Cookery from 1966 basically implied it was insane to do anything but sauté them. I did check out Kitchen Magic with Mushrooms from the Mycological Society of San Francisco, but the recipes just didn't appeal. But I do like this book. It is utterly charming with little line drawings in the margins and half sheets illustrating each genus. The cover drew my eye at a book sale because it reminds me of the Florentine papers used in book binding. The recipes, which cover many types of mushrooms, run the gamut from simple to complex. Some are a little convoluted as a way to use up mushrooms and justify the hunt, such as Maramisus Cookies, which combines chocolate chip cookie dough, maraschino cherries and fairy-ring mushrooms. Ugh. Others seem quite palatable, including Puffball French Fries.

I must say that the book has not inspired me to go mushrooming beyond the easily identifiable morel and puffball. The book is quite clear that it is not an identification guide, but reading caution after caution, makes me…well…cautious. Not to mention all those British murder mysteries that employ mushrooms. 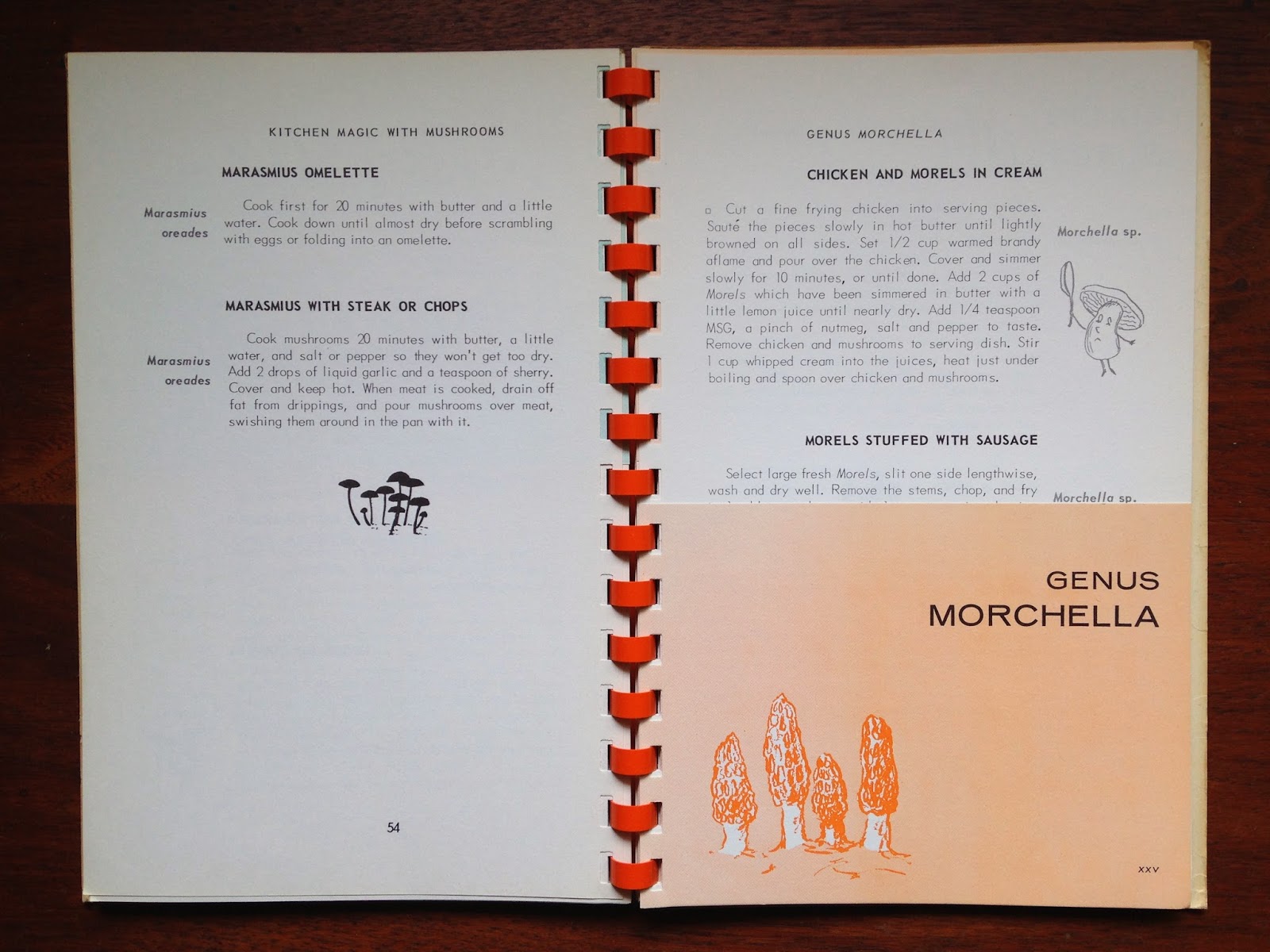 In the end, I went with a simple and delicious recipe from Molly O'Neill's A Well-Seasoned Appetite: Recipes from an American Kitchen that mixes sautéed morels with cream, pasta and a little cheese. It was magnificent! This book deserves it own entry, so look for that in the future.

Melt the butter over medium-high heat. Add the shallots and cook until soft, about 3 minutes. Add the morels and salt and cook, stirring occasionally, for 10 minutes. Add the cognac or brandy and let cook off a bit. Add the cream and simmer for 5-10 minutes. Longer won't hurt and may be better as long as you keep the heat low--you want to infuse the cream with all the good morel flavor.

Meanwhile, get the pasta water boiling. Cook fettuccine until al dente. Drain, reserving some liquid, and mix with the morels and cream. Add the cheese and parley, pepper, and salt if needed. Add ¼ to ½ cup of pasta liquid to loosen sauce as needed. Like all pastas--eat it while it is hot and fresh. I finally realized that one of the reasons pasta is traditionally served as a first course is because larger portions cool and congeal too quickly. Serves 4 as a main course.

I'll close with something I noticed on a trip to New Orleans at the beginning of Carnival season. In making conversation with locals, it seemed natural to ask them where they liked to view parades but I got a weird vibe after asking this. After noticing the hemming and hawing along with the vagueness of the answers I realized, "Oh! That's like asking someone at home where they find their morels. It's simply not done." In fact, even after people move in Michigan they still don't tell their spots (you know who you are!)