Summer time and the living is easy 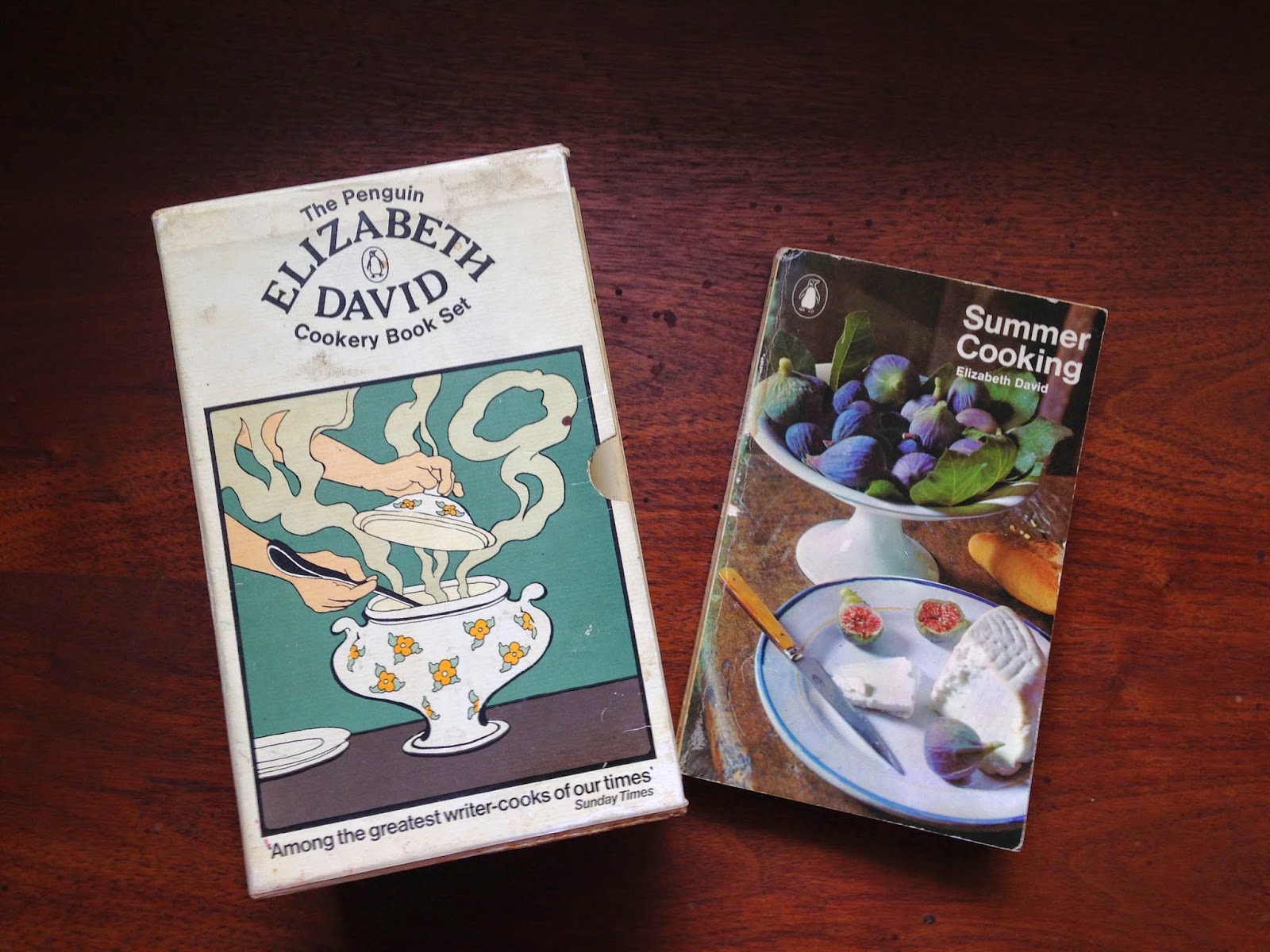 It's high summer in Michigan now and it's time for my annual reading of Elizabeth David's Summer Cooking. I don't remember when I first started reading it in the summer, but it has become a small ritual of the season. Sometimes I read one or more of the others in my Penguin box set: French Country Cooking, French Provincial Cooking, Italian Food or Mediterranean Food; the latter is just as timely for the season with its emphasis on warm weather crops.

But Summer Cooking is a must each year as the days get a little too warm and the threat of too much produce becomes more real. It's a slim book so it doesn't take long and it's packed with ideas on how to make the most of summer eating. Not necessarily cooking, because one of the book's strengths is David's recognition that although summer is bountiful in terms of produce, we often don't feel like cooking with a lot of heat or fussing over complicated recipes. Simpler is better in the summer and many of her recipes are ideas for salads and cold plates.

The more I read David the more I wonder at her food. Given that when she wrote these  England was barely past WWII and had only just begun to end rationing, her books must have been like a fever-dream to UK eaters. Not only did David draw on foreign cuisines, she called for ingredients that were neither in vogue or readily available to her readers including such modern staples as olive oil, red peppers, and zucchini.

Yet somehow she doesn't come off as snooty or contrived. Rather than causing anger at food that is hard to obtain, she inspired generations to reach higher. And if you couldn't get bottarga or fresh anchovies, then you could use her same focused approach on the ingredients you did have. In David's world a good cook stops complaining about what she can or cannot get and uses what is good to make something worth eating.

Summer Cooking is all over the map culinarily-speaking. Perhaps that is one of the reasons it still seems fresh. The flavors are bold, with liberal use of herbs and acids. There is an emphasis on seasonal vegetables which is useful, as well as advice that still holds up today on how to cook when on vacation. Perhaps that is because many of today's summer cottages still have kitchens equipped from the 50s.

I use this book more for ideas than for recipes. I have made some and adapted some so thoroughly that they look nothing like hers although in my head I still think of them as a Elizabeth David recipes. Take her tonnato sauce for example. For years, every summer I make this once or twice and eat it on top of green beans and/or sliced tomatoes. Traditionally tonnato is a tuna-based mayonnaise sauce that you pour over cooked veal and let chill. I'm sure that is good, but I've never bothered with the veal roast. It just sounded like it would be good as a dip/sauce for veggies so I made it.

I think I make it from David's recipe but in looking it over for this post I realize I have drifted far off course. I don't measure it anymore either, just add everything to taste. I think David would approve, but she was known for her opinionated voice, so perhaps not unconditionally.

If tonnato sauce intrigues you, feel free to play with mine:

1 5oz can of chunk light tuna (note not albacore--you want the mushy stuff for this)
2 Tbs of mayonnaise
1 lemon--you'll need ½ to all of the juice
1 Tbs water
1 Tbs olive oil
½ tsp of anchovy paste
fresh pepper. Salt if needed

Puree all ingredients in a blender. Serve with cooked green beans, tomatoes from the garden and/or hard-boiled eggs.

In contrast, here is what David's recipe says:

"Make a good cupful of mayonnaise with 2 yolks of eggs, olive oil and lemon juice. Pound or sieve about 2 oz. of best quality-tunny fish in oil, and add this to the mayonnaise."

So where did I get the rest of mine? Perhaps an amalgamation of other recipes, perhaps I stole it from Marcella Hazan? More research will be needed.