As I noted earlier, I was in Charleston SC for the annual conference of the Annual Society for Indexing. The keynote speakers were Matt and Ted Lee of the Lee Bros. Boiled Peanuts Catalogue and the authors of several cookbooks, including the IACP and James Beard award winner The Lee Bros. Southern Cookbook.

Charming, funny and entertaining, the Lees are natural speakers, and I thoroughly enjoyed their tale of getting started in the food retail business and the process of creating cookbooks. I fear some of my indexing compatriots hoped for rather more indexing talk, but I was busy taking notes about the New York cookbook publishing world, obscure local foods, and where to eat in Charleston.

They began with reminiscing about their childhoods and how it wasn't until they were adults that they realized how fortunate they had been to grow up in Charleston, where food traditions are strong and the microclimate allows for a wide range of produce. As children, they and all the neighborhood kids would forage fruit trees including persimmons, citrus, loquats and mulberries. They went crabbing and shucked oysters. They ate regional foods like glasswort, fig preserves and tomalos (pickled baby green tomatoes). They had a special fish guy for fin fish and another guy for shrimp.

Living in NYC and homesick they began their catalog of foods for displaced Southerners. From that sprang the first book and the rest was culinary history.  In addition to their books, catalogue and other projects they dropped this gem: they run a cookbook bootcamp! It's a two-day seminar about cookbook writing both from the recipe side and the business side. It sounds challenging and fascinating! They understand something it took me years to articulate--a great cookbook isn't just a collection of recipes, it also tells a story.

Alas, they had to wrap up the talk, so I didn't get to ask any questions. But I did get a new cookbook: The Lee Bros. Charleston Kitchen. It's a good-looking book, with attractive photos of Charleston people and places, as well as the food. I haven't had a chance to try anything yet, but several recipes are on my to-do list, including:

I'd like to make the following, but I fear obtaining the ingredients will prove difficult: 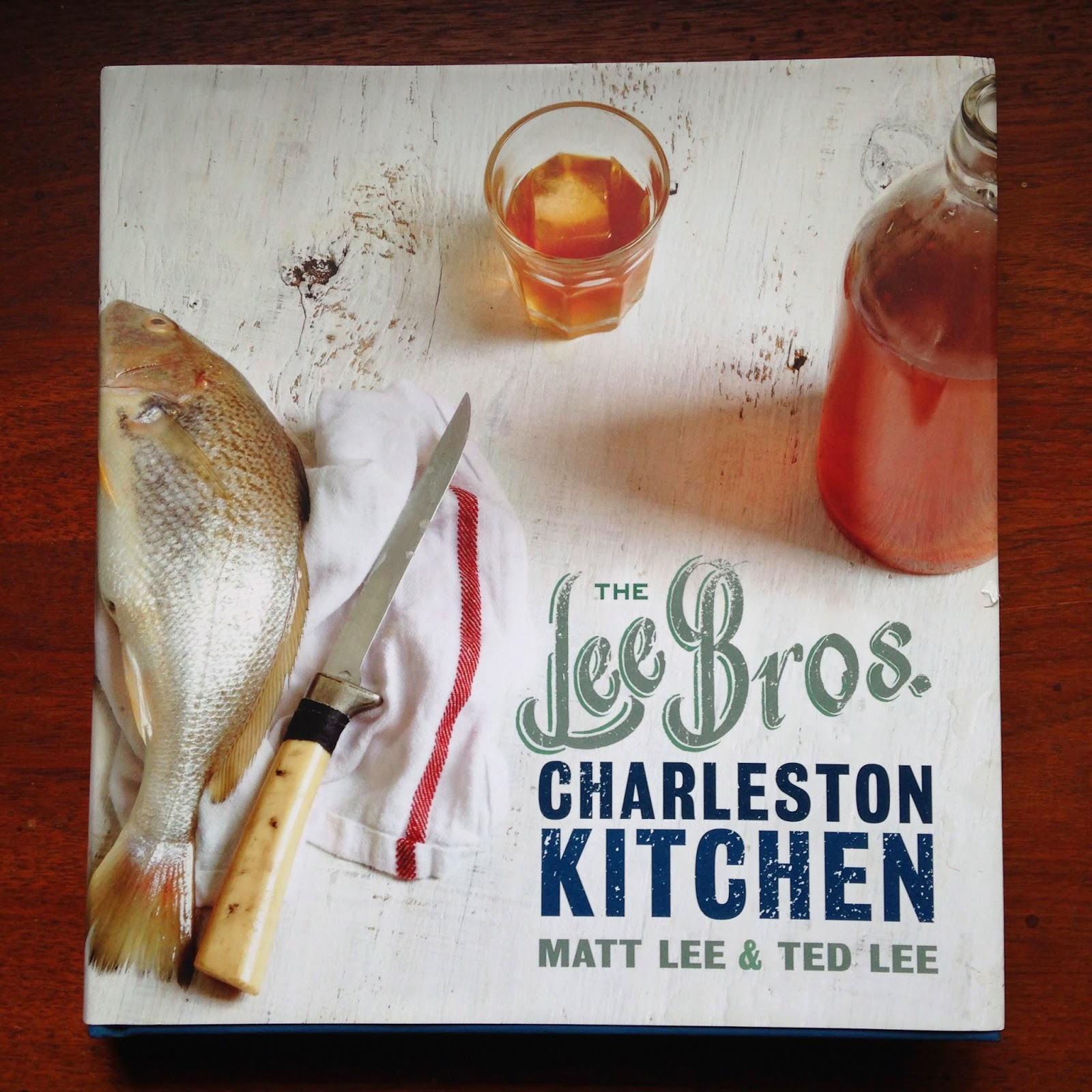 Email ThisBlogThis!Share to TwitterShare to FacebookShare to Pinterest
Labels: South

Working from home I rarely get to see my colleagues, but once a year the American Society for Indexing has a national conference, and I usually try to go. This year, the conference was in Charleston, SC, which would have been impetus enough to attend, in addition to all the excellent continuing education, trade talk, and just plain fun of being with other people who actually get what I do for a living. 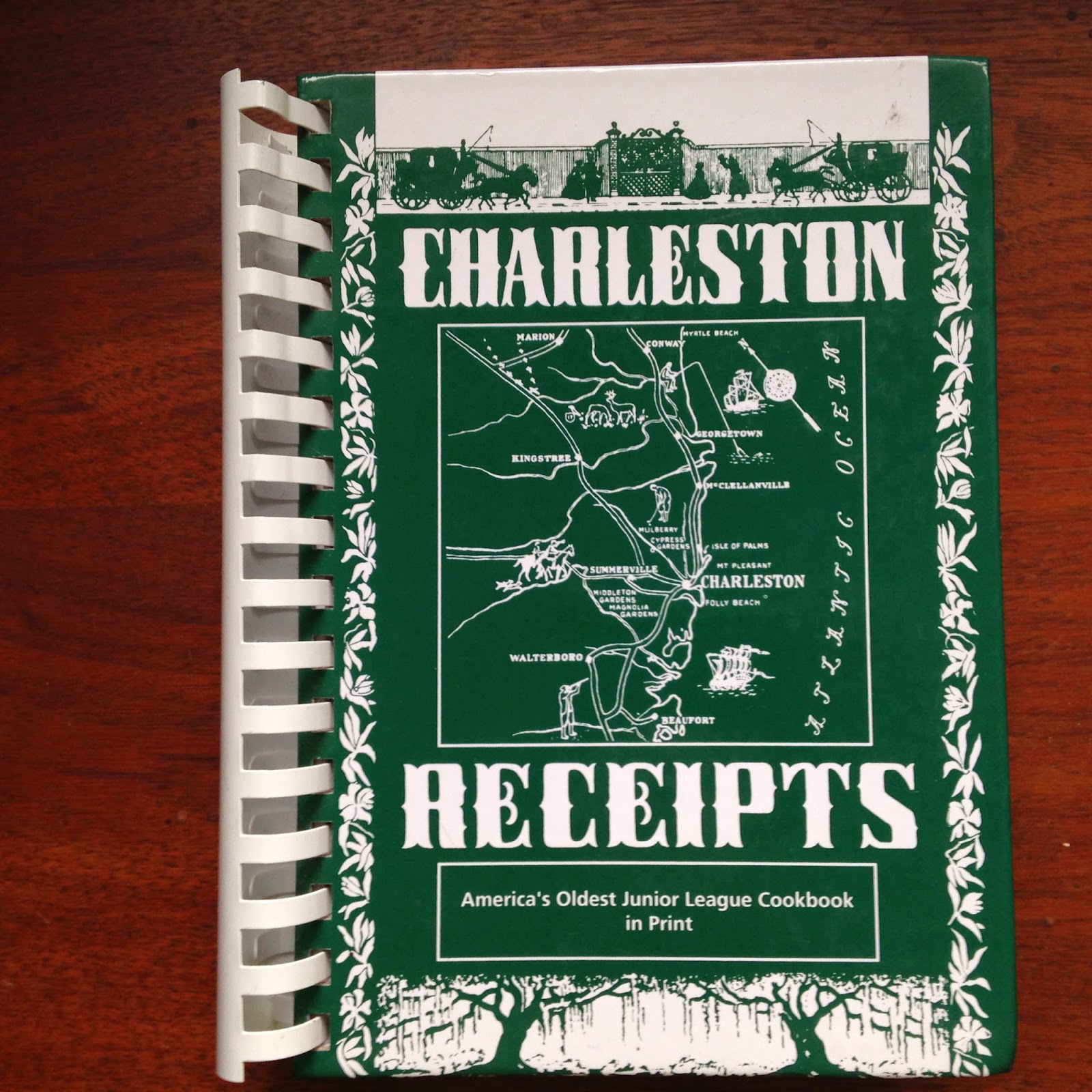 Historic Charleston is charming with its lovingly preserved old homes and gorgeous gardens, plus many great restaurants and rich food traditions. One of those traditions is Charleston Receipts, by some accounts the oldest Junior League community cookbook. My copy is from the thirty-fourth printing in 2009. I think it can be deemed a success.

A friend gave this to me after he served our book group the Hampton Plantation Shrimp Pilau. Though it looks sort of plain on the page, it is a mixture that is greater than the sum of its parts--all savory, shrimp-y and bacon-y rice. I only wish I had had leftovers to fry up the next day for lunch.

Fry bacon until crisp. Save to use later. Add bacon grease to water in which you cook rice. In another pot, melt butter, add celery and bell pepper. Cook a few minutes; add shrimp which have been sprinkled with Worcestershire sauce and dredged with flour. Stir and simmer until flour is cooked. Season with salt and pepper. Now add cooked rice and mix until rice is "all buttery" and "shrimp." You may want to add more butter. Into this stir the crisp bacon, crumbled.

I believe my friend adds more Worcestershire sauce to taste and usually doubles or triples the batch, which serves 6.

I think one of the reasons for Charleston's Receipts longevity is it pre-dates the convenience foods boom of the 50s. There are no name-brand recipes in here or canned cream soups. Plain gelatin, canned vegetables and commercial mayonnaise are about it for pre-made ingredients.

There are recipes for punches made by the gallon, crab and shrimp done in myriad ways, a huge section on desserts, and a small, but intriguing, assortment of pickles and preserves. I love the historical reach, including a White Soup that would be at home in a Jane Austen novel.

The book captures several levels of cuisine including Low Country, Gullah, and the French-influenced cuisine of the upper class. Class and race are definitely present in the book. The illustrations are beautiful drawings and paintings, but they romanticize (and possibly caricature) the hard work of Black Charlestonians. Most of the recipes are signed, but given the social structure of Charleston at the time of publication, it can be safely assumed that many of the recipes were created not by their presenters but by the cooks of those presenters.

The Lee brothers, who were the ASI conference keynote speakers and are native Charlestonians, noted this fact in their address and offered some other fun tidbits about the book including the existence of a precursor pamphlet called Charleston Recipes and that the Junior League sued the creator of White Trash Cooking for plagiarism. Oh scandal!

More on the Lee brothers themselves next time….
Posted by Devon at 12:55 PM No comments: