In the kitchen with Peter Rabbit

Here is a little gem. Children's author Arnold Dobrin takes inspiration from the world of Beatrix Potter in a small cookbook for children. Richly illustrated from Potter's work it is a feast for the eyes and conjures up a halcyon world of cozy tea-tables and kitchen gardens. 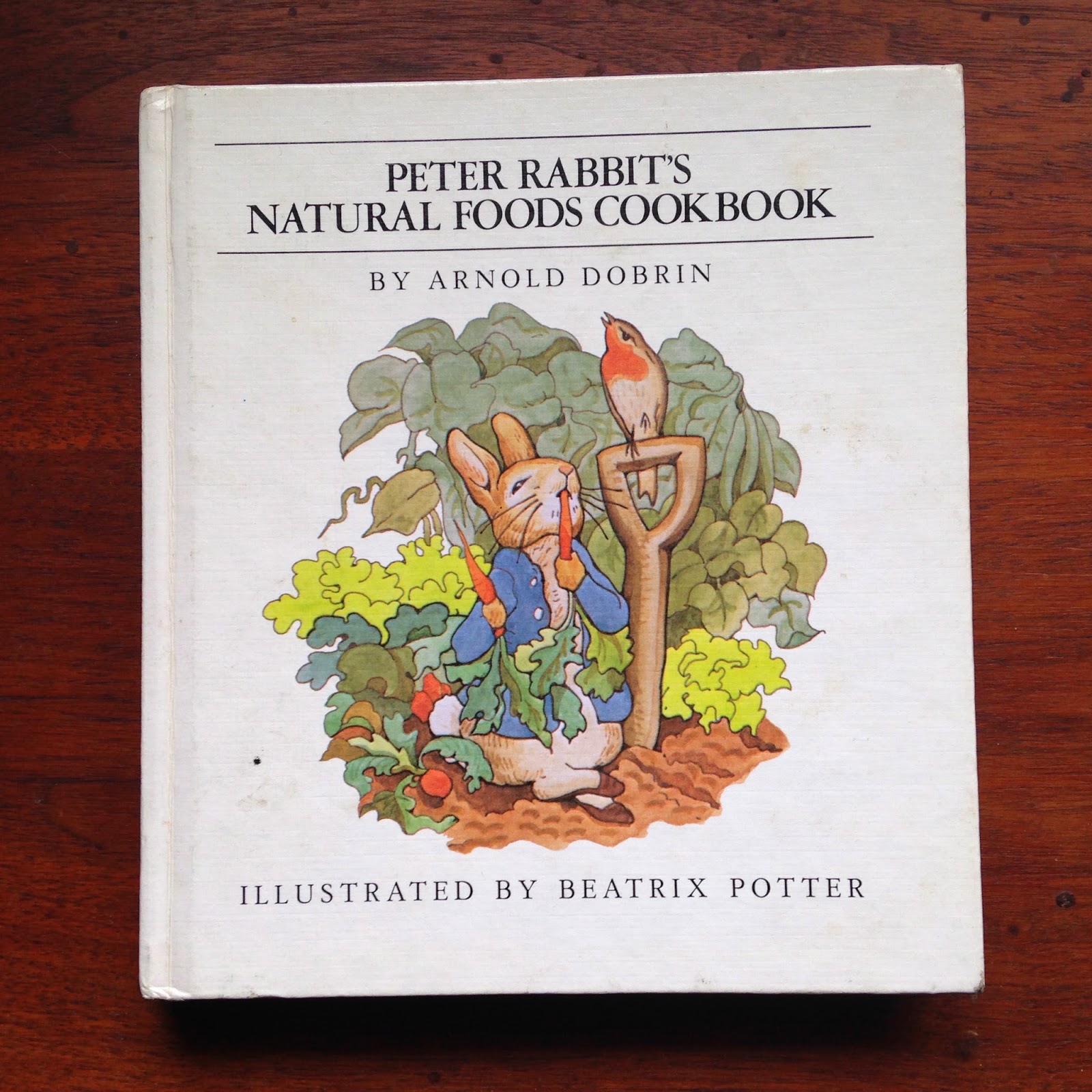 I wish I knew more about Dobrin and how he devised his recipes. They are a fairly standard set of natural food recipes: lots of sandwiches made with creamed or cottage cheese, some simple soups, and most of the baked good include whole wheat flour or wheat germ.

There are no meat recipes, though some of the soups call for the option of chicken stock, so it is not a strictly vegetarian book. I can't tell if the vegetarianism is deliberate or a result of avoiding the dangers of sautéing and roasting and the increased food safety issues of raw meat.

But the techniques are not all simple. Dobrin calls for some surprisingly sophisticated techniques, including blanching tomatoes to remove their skins, using a food mill, and stir-frying, all advanced moves for an adult in 1977.

There are technique and safety tips at the back of the book, but it clearly assumes that children will be cooking with adult supervision. Dobrin never talks down to his audience, and I like his frequent tag for optional ingredients like raisins and nuts--use them "if you like them." What better way to learn about taste than to learn to trust your own palate?

That being said, some of the recipes have more appeal than others. Mr. McGregor's Scrumptious Pureed Beets may not get as many takers as Samuel Whiskers' Roly-Poly Pancakes. The breakfast and dessert sections are the most appealing, but I love the page entitled "How to Like Onions" which elucidates the different members of the allium family, their culinary uses, and how onions enhance the flavors of many dishes.

While I was past the target age for Potter when this book came out, I remember being fascinated by it and wanting to 1) cook from it and 2) be in Potter's world. I think it may also have been an early experience of nostalgia. I remembered reading the books as a small child and being frightened for Peter in the garden. I remembered trying to figure out what cambric tea was and how it would taste. Just as I had when very small, I identified more with some characters than others and that spilled over into my liking or disliking of recipes based on their associated characters rather than their ingredients.

In addition, it was somewhere around this time, or maybe a bit later, that I read Nothing is Impossible: The Story of Beatrix Potter a biography written for children by Dorothy Aldis. Although Kirkus slammed its lack of detail and authority, I loved its portrayal of how a young artist found her medium and her subject matter. It is a very interior book, but it suited the subject. And while today I am only an occasional reader of biographies, those I do read tend to be about artists and musicians.